Lending Money to Family and Friends

Many individuals have been stuck in this situation: your friend complains that they have no money, and then they either directly or indirectly ask you if you can lend them any money to help them out. Or maybe your friend or family member is just constantly complaining about their lack of money. So, what do you do? How do you know when or if you should lend money to someone?

Usually when you’re on the outside of the situation and someone is telling you this, your instant gut reaction is “NO! Don’t lend anyone money!”

However, when you’re on the spot and someone is asking you, then it’s much, much harder to decide. It is especially hard to say no when you know that the person truly needs the money and that you can actually help by lending them what you can.

Helping people out with their money situations isn’t always a horrible idea. Recently, someone drained my sister’s bank account.  Her bank said they would put all the money back since it was identity theft. However, it would take a couple of weeks. I lent my sister money for gas and everything else. I had faith that she would pay me back, so I was not worried.

Also recently, my friend bought a house at an auction. He wanted the house before it went to auction, and submitted a bid, but the bank said it was going to auction soon so they rejected it. He was able to secure that house at around $30,000 less than the bid he put in. But the catch was that he needed cash for this. His family all gathered money for him and he bought the house with cash. He now has a contract with them through the bank to pay them all back with a 4% interest rate.

In this case, his family is extremely trusting him with their money, but they have were smart with obtaining a lot of paperwork and also going through the bank as well to make sure that nothing would fall through.

However, there are times when you should say no also. If your gut instinct is that this is a horrible idea, then don’t do it! You don’t want to risk a relationship that you have over money.

Things to Do Before Lending Money

There are many things that you need to think about when you lend money:

1. Think. Think about all of the possible positives and negatives that could potentially happen from this lending situation. Also, give yourself time to think it over. There is no need to rush to the ATM as soon as your family or family member asks you for help.

You need to really think over and make sure that this is a good idea.

2. If you don’t get the money back, then what will happen? Are you willing to lose the relationship over money, or will you forgive and forget? This is tough because the person might continue to ask you to lend more money.

Also, there is the potential that it could create a rift in many relationships that you have. People might choose sides. Is this worth it?

3. Don’t lend what you can’t afford. You would think this would be an easy concept, but many lend much more than they can afford. There is the probability that the person won’t pay you back.

Would you be alright if they didn’t pay you back? Or are you financially dependent on getting the money back in a certain amount of time?

4. Discuss the terms of the arrangement and get it in writing. Yes, getting the arrangement and terms in writing might seem too formal and the person will think that you don’t trust them, but this is a smart idea. This will help everyone understand what is happening, and if anyone forgets what was agreed upon in the future, then you are able to look back on your agreement and terms.

5. Talk about it. Understand what the money is for. If you don’t agree with it right in the beginning, then you will want to say no now instead of bugging them about their money choices later when they are trying to pay you back. Talk about payment terms, interest rates, schedules, etc.

Have you ever lent money to a friend or family member? How did it go?

Can You Afford it?

I remember growing up and having my parents tell me that they couldn’t afford this or that. You can imagine the trauma that this caused to a child, as I worried about whether my parents would have enough money to put food on the table. In reality, our family was doing just fine financially. It was a poor way of communicating to their child that they didn’t feel like buying me everything that I wanted.

We use this phrase, “I can’t afford it,” to describe what we are willing to pay for and what we are not. In reality, most of us can afford many things that we use this term for. You may say that you can’t afford something, but what you really mean is that you don’t care enough to prioritize that. Proper debt management is about prioritizing your expenses. It means avoiding unnecessary spending and using whatever excuse necessary to avoid going into debt.

While the phrase, “I can’t afford this,” may not be entirely accurate, it does represent an effort to prioritize your expenses. The fact that you are considering what you should and should not buy, shows that you are trying to resist going into debt. Surprisingly, this happens less than you would think.

Many people these days are going into debt without considering the consequences. They become attached to material possessions and lose track of everything else. They become convinced that this will buy their happiness. But, in reality, its putting them further away from it.

When you make your next big purchase, it is important to consider whether it is that important to you. While many people would ask, “Can I afford this?” the question is really “Is this important to me?” This is a better question because after the basic expenses like rent, we can afford to do a lot of things. It just means that we have to give up other things. When I am considering going on a vacation, I make sure that I can still afford to do other things that are important like saving for retirement, giving to charity, paying my bills, etc. Taking time to ask yourself these questions can go a long ways to help you stay out of debt and responsible with your finances.

Christian Financial Alliance: Spiritual Reasons to Get Out of Debt 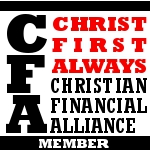 The Christian Financial Alliance was created to help readers. The idea is this: Create a panel of biblical finance gurus – people who take seriously the call to teach the Bible accurately with grace and truth. Once a month, we post a question with a response from our panel to provide you with well-rounded, sound, biblical advice. For more on the Christian Financial Alliance (or to join our team) click here.

Name one spiritual reason to get out of debt.

“When you’re in debt it can become a barrier to your relationship with Christ. As Matthew 6:24 says, “No one can serve two masters. Either he will hate the one and love the other, or he will be devoted to the one and despise the other. You cannot serve both God and Money.” When you have a large amount of debt it can cause money to become your master, at the detriment of your walk with Christ.” – BibleMoneyMatters.com

“Because it’s wise to do so. Every time the Bible talks about debt, it does so as a warning or in a negative light – debt is never presented in a positive manner. The Bible’s wisdom says to avoid debt and the soundness of that advice has been proven time and time again.” – FreeMoneyFinance.com

“While debt itself is not evil, it can be a sign pointing to a deeper problem in our lives. The typical person in thousands of dollars of credit card debt gets there by being focused on consumerism and materialism rather than pursuing God’s kingdom first. (That’s not always the case, but it is very common.) So a good spiritual reason to get out of debt is to break that cycle of buy, buy, buy and free yourself from valuing your life based on your possessions. For many people, getting out of debt can be a first step to passionately pursuing God’s kingdom.” – ProvidentPlan.com

“Self-control is a fruit of the Spirit (Gal. 5:23). Avoiding and getting out of debt requires self-control (to say the least!). Therefore, I think we learn a lot about this fruit when we start steering away from debt.” – DollarsandDoctrine.com

“Debt can hinder our ability to hear God’s call on our life. We can have so many bills to pay that if God calls us to some type of work that pays less that what we’re currently making we may think we have a fuzzy connection. Living free from the bondage of debt frees us to hear and respond to whatever He calls us to.” – MattaboutMoney.com

“Wonderful opportunities to serve the Lord are jeopardized when debt obligations demand our constant attention. It’s awfully hard to purchase airline tickets and the supplies needed to go on a missions trip when monthly payments for the Visa and line of credit consume most or all of our income above the basic necessities. Imagine how great it would be to hear of a need for help and be able to pay cash – not only to visit that country to work – but to generously give to the individuals who stay there serving the Lord when we return home! Financial freedom from debt not only releases us from repayment bondage but it allows us to answer God’s calling when asked to serve Him.” – StewardshipWeekly.com

For more on the Christian Financial Alliance (or to join our team) click here.

Readers, what would your answer be? What’s a spiritual reason to get out of debt? What did you think of the responses? Share your thoughts in the comments below!