Raising a Cow for Beef: Month 14

Last month, I posted an update about how my wife and I are raising a cow for beef. This is a summary of our activity and costs for month 14. As always, let’s first check Bambi’s growth. Here he is at thirteen months old: 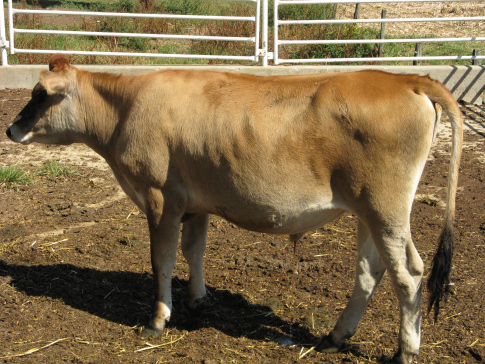 And here he is at fourteen months old:

I had a hard time getting a good picture this month due to lighting levels and moving cows. (Still haven’t gotten Bambi to say cheese…) It’s hard to tell from the pictures, but he did seem to be a bit bigger to me than the last time I saw him. He should certainly bulk up now that he’s being fed a high corn diet. We’ll see how he looks in a month!

I’ve finally got the costs for boarding Bambi included in this update. I’m paying about $1/day for boarding him, which seems to be a reasonable rate. (Is it? Anyone know for sure?) This is actually a better deal than feeding him myself, but that’s because farmers are able to buy feed in bulk and/or grow most of it themselves.

I paid ahead for the next month or so for Bambi’s last bit of boarding costs, so next month there won’t be much to add. The final update (after he’s slaughtered) will include the last $10 or so for boarding plus the butcher fees. I’m not sure yet, but I’m estimating butcher fees will be around $300. So maybe I’ll have a final cost of right under $1,000 (more if I include the cost of my time). I have no idea how much meat I’ll get, so it remains to be seen how this all works out financially.

This month Bambi moved from one farm to another. Why? Well, the friends that have him now are the ones who will be taking him to the butcher when they take their cow, so it just makes things a little easier. But also, several people recommended finishing Bambi by feeding him lots of corn for the last couple of months and we can’t do that where he was staying before. He was in with many other cows, so we couldn’t feed him anything special. Now that he’s at our other friends’ farm, he’ll be staying with just one other cow and they’ll both be on a heavy grain diet.

Other than that, there’s not much to talk about. We’re still looking for a freezer. I think I’ll need at least 14-16 cubic feet of storage space for the meat. And we still have to decide on the cuts we want, but there’s plenty of time left for that. I’ll probably focus on getting these things done in November before he goes to the butcher in December.

If you haven’t already make sure you sign up for free updates to Provident Planning so you don’t miss out on the final steps in the process of raising a cow for beef!

3 responses to Raising a Cow for Beef: Month 14