Raising a Cow for Beef: Month 11

Last month, I posted an update about how my wife and I are raising a cow for beef. This is a summary of our activity and costs for month 11. As always, let’s first check Bambi’s growth. Here he is at ten months old: 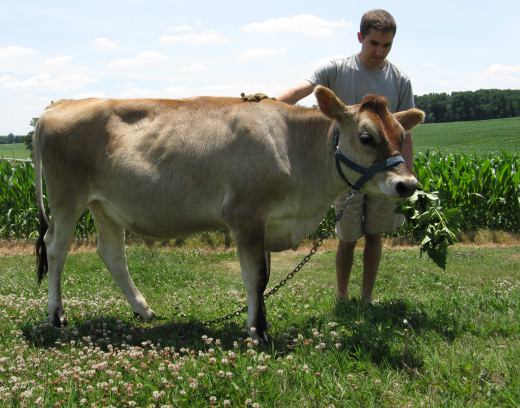 And here he is at eleven months old: 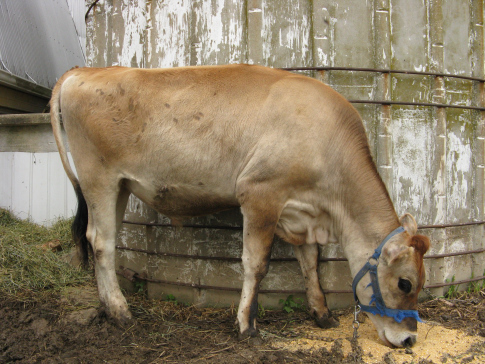 Bambi is well over 700 pounds now. He might be nearing 750 but I haven’t put him on our bathroom scales in a while. To give you some perspective, the ring on the silo where his back reaches is about four feet off the ground. He’s still growing at a steady rate of about 2 pounds per day. This isn’t phenomenal by industry standards, but I’m happy with it.

I spent a little less time this past month because I’ve become a bit more efficient and because of a change I made a little less than a week ago. (Read on to find out.) His feed cost about the same as last month.

And here are our total costs over the past eleven months:

After almost a year, we’ve spent a total of $584.18 and 102 hours raising a cow for beef. The costs have been pretty steady throughout the spring and summer, and I don’t expect much to change through the fall. It may actually cost us a little less now because I’ll be sending Bambi away. No, we’re not butchering him yet.

As I mentioned in my last post, my main concern has been about what I’ll do with Bambi once he gets too big to handle. It turns out he’s reached that point now. I can still get him where I want him to go – but just barely. His cooperation is important because I have to move him to a new grassy spot every day since we don’t have a fenced-in pasture.

After a little spat we had last Friday, I decided it’s time to either leave him in the barn or send him to live in a pasture until November. We both came out of that little event unharmed, but every time I look at Bambi I only see this:

If I had to leave him in the barn, we would be spending quite a bit on hay from now until November. Thankfully, the Hersheys (who gave us Bambi) have agreed to let him stay on their farm in a pasture with their pregnant heifers. This means our costs should go down a bit and our time commitment will go to zero. He hasn’t left our place yet, so in the meantime I’m keeping him at the silo and feeding him only hay and grain (no grass).

There are several benefits to this arrangement – my safety not being the least of these. Bambi’s getting big enough that he can almost drag me around, so I don’t want to deal with moving him anymore. But now he’ll have a fresh and continuous water source, which means no more filling up buckets for me. It also won’t take the Hersheys any extra time to feed him because they already have to feed their heifers. Finally, I won’t have to worry about Bambi getting loose any more (which almost happened twice this past month).

This is not to say that I couldn’t continue raising Bambi myself. As I said before, leaving him in the barn is an option. However, I doubt he’d like it much (not that it matters) and this option will cost less in time and money.

With this new arrangement in place, I probably won’t have much to say about Bambi until he goes to the butcher. If you all are interested, I could keep doing updates once a month to track his growth and cover any changes in costs. If not, I’ll just do a final update after we send him off to be butchered. If you have any questions or comments, please leave them below. And make sure you sign up for free updates to Provident Planning if you don’t want to miss out on the last updates about Bambi!